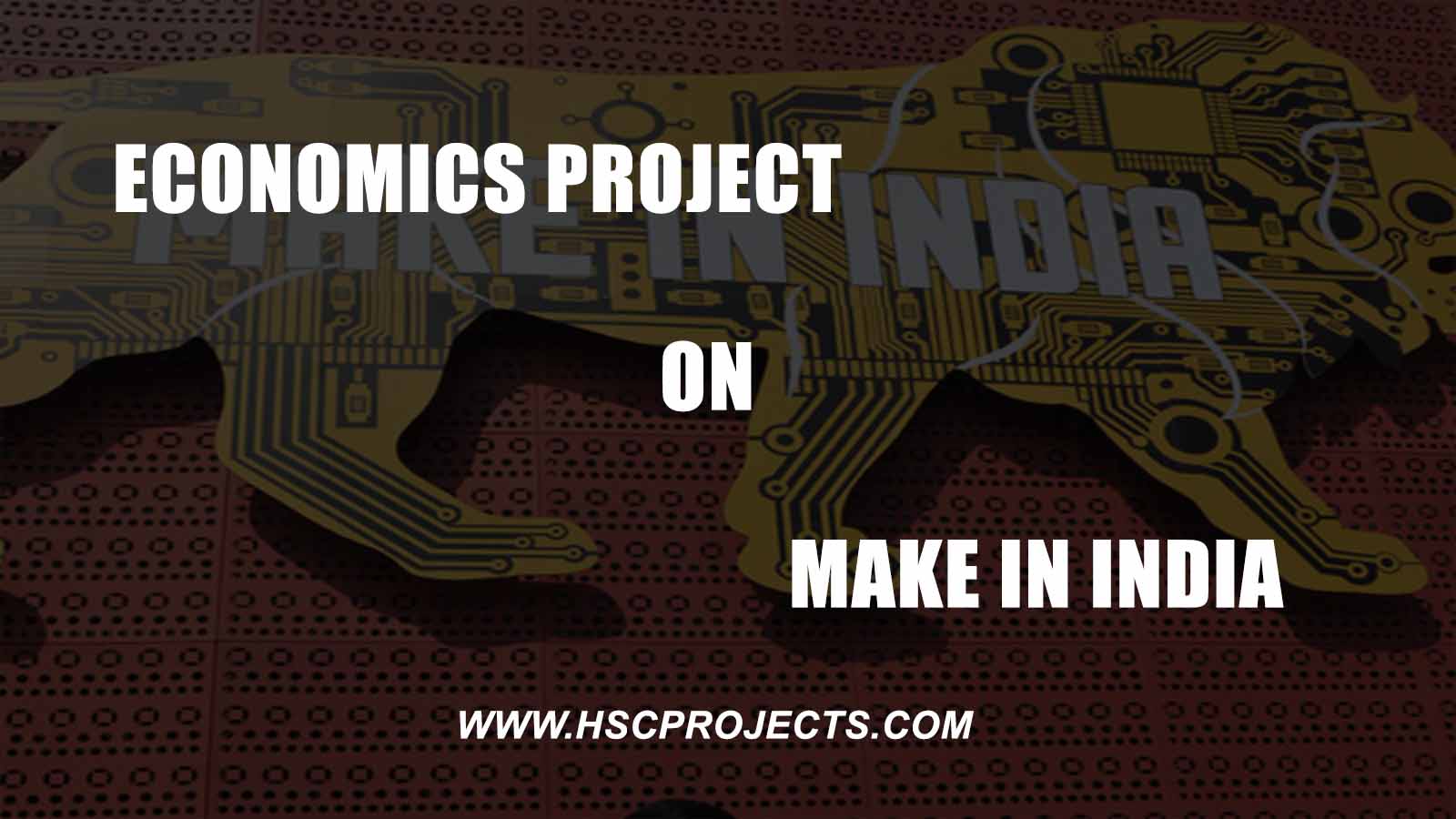 Make in India is an initiative launched by the Government of India to encourage national, as well as multi-national companies to manufacture their products in India. It was launched by Prime Minister Narendra Modi on 25 September 2014. India emerged, after initiation of the program in 2015, as the top destination globally for foreign direct investment (FDI), surpassing the United States of America as well as the People’s Republic of China. In 2015, India received US $63 billion in FDI.

The scheme was launched on 25th September 2014 in a function at the Vigyan Bhawan.

The Ministry of Defense is auctioning a 600 billion contract to design and build a Fighting Infantry Combat Vehicle in India. It will be awarded in 2016.

LOGO OF MAKE IN INDIA

Make-in-India is a lion step, said Prime Minister, after launching the logo of his ambitious campaign to attract companies to India. The logo is the silhouette of a lion on the prowl, made entirely on cogs, symbolizing manufacturing, strength, and national pride. The national emblem, Ashok Chakra, also has four lions. In Indian folklore, the lion denotes the attainment of enlightenment, besides representing power, courage, pride, and confidence.

The logo adorns the brand new website makeinindia.com – for the campaign and all its brochures.

The website is a ready reckoner for data on 25 sectors. 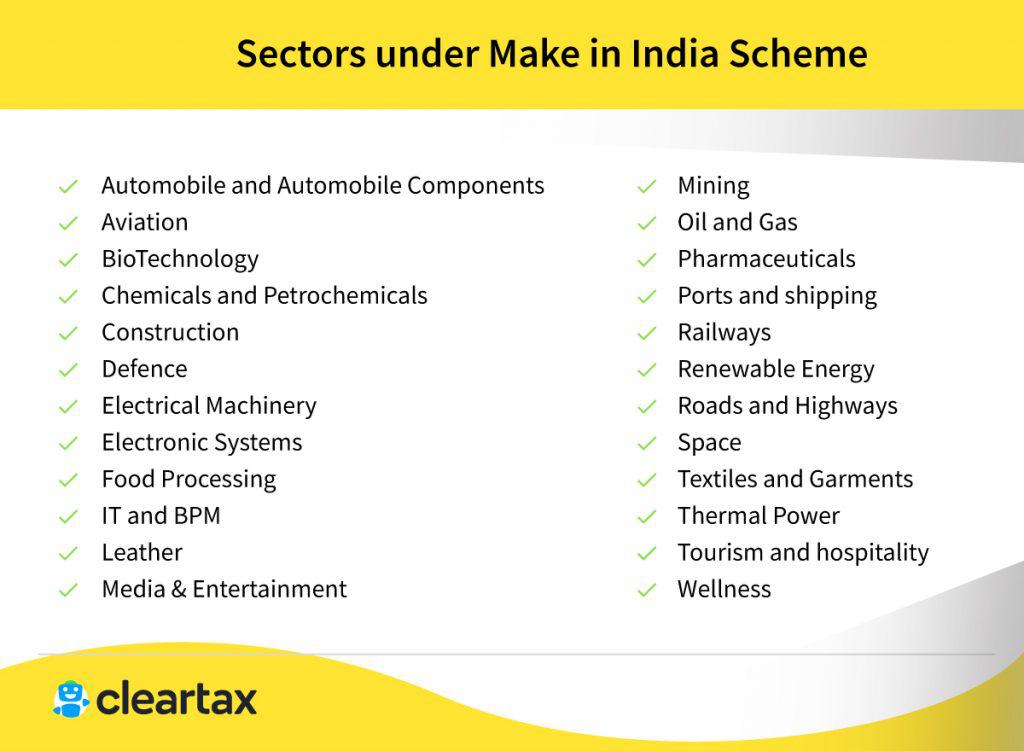 Make in India focuses on the following twenty-five sectors of the economy.

“MAKE IN INDIA – This is a step of a lion; nobody can question the talent of our people after Mangalyan.”

If each of our millions of youngsters resolves to manufacture at least one such item, India can become a net exporter of .1, PM Narendra Modi, urge upon the youth, particular of our small entrepreneurs that they would never compromise at least two counts:

Why Make In India? 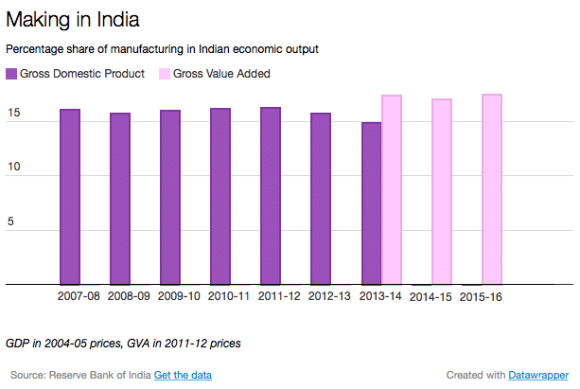 And the way to do this, according to Make in India, is to increase the share of manufacturing India’s GDP to 25% by 2022, which is expected to generate approximately 100 million jobs for Indian workers. Responding to the lifting of foreign direct investment caps in several sectors, efforts to improve the ease of doing business, and, of course, Prime Minister’s frenetic wooing of investment in foreign travels, gross FDI flows to India jumped 27% to $45 billion in 2015-16. Even the Finance ministry’s usually measured Economic Survey 2015-16 touted this as a success for Make In India.

Consider the most recent data from RBI, broken up by sector, since Make in India specifically concerns manufacturing. After an encouraging jump to record $ 9.6 billion in 2014-15, FDI in manufacturing fell to $8.4 billion in 2015 – 16.

Note that these numbers cover inflows approved by the RBI and other agencies and exclude share purchases, reinvested earnings, and so on. This pattern is consistent with data from the Department of Industrial Policy. And Promotion.

Furthermore, the percentage of FDI flowing to manufacturing, which has been the range of 35-40% for the past four years, dropped to 23% in which 2015-16. Rather than manufacturing, services – think e-commerce providers like Amazon, Snapdeal and Flipkart, ride-sharing services like Uber and Ola – seem to be drawing a greater share of investment.

PROS AND CONS OF MAKE IN INDIA SCHEME 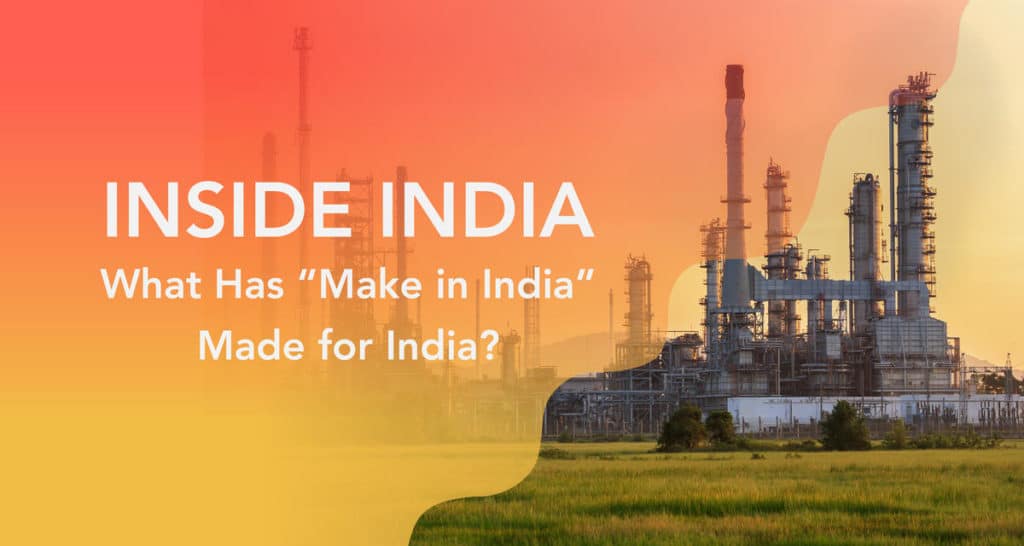 The NDA government’s Make in India Campaign has till early October attracted INR 2000 cr. Worth investment proposals. The campaign has, despite this, found its share of critics. The topmost of these critics are leveled against the incumbent of govt. It has been felt that the government does not walk its talk – labor reforms and policy reforms that are fundamental for the success of the Make in India campaign have not yet been implemented. Several layoffs in companies such as Nokia India cast long shadows over the campaign

According to my view “Make in India” program is best program launched by any government yet, and significant achievements have been made under the Make in India initiative since its launch on 25th September 2014 which will help India in the long run for sure to become indigenous capable and lessen our key imports.

Make in India is an ambitious project, but it is one that India desperately needs to kickstart and sustain its growth momentum. With rent fewer policies towards this end, it is possible to make India the powerhouse of the manufacturing sector in the world.

India is a country rich in natural resources. Labour is plenty, and skilled labor is easily available, given the high rates of unemployment among the educated class of the country. With Asia developing as the outsourcing hub of the world, India is soon becoming the preferred manufacturing destination of most investors across the globe. Make in India is the Indian government’s effort to harness this demand and boost the Indian economy.

India ranks low on “ease of doing business index.” Labour laws in the country are still not conducive to the Make in India campaign.

This is to certify that Simran Jain of class Xll of St. Sophia Sr. Sec. School, Paschim Vihar, has completed her project under my supervision. She has taken care and shown the utmost sincerity in the completion of this project.

I want to express my special thanks of gratitude to my teacher as well as our principal who gave me the golden opportunity to do this wonderful project on ” Make In India,” which also helped me, in doing a lot of research and I came to know so many new things. Secondly, I would like to thank my parents and friends who helped me a lot in finalizing the project in a limited time frame.