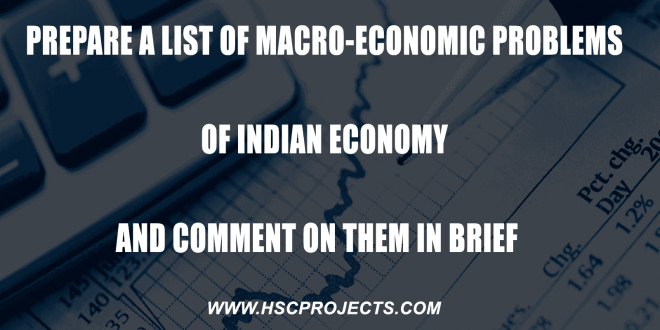 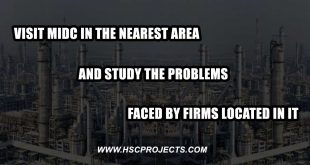 Undesirable situations that exist in the Macro-Economy, mainly because one or more of the macroeconomic goals are not satisfactorily attained. The primary problems are unemployment, inflation, and stagnant growth. Macroeconomic theories are designed to explain why these problems emerge and to recommend corrective policies. That’s why in this project we will talk about List of Macro-Economics Problems of Indian Economy and will Comment on Them in Brief

Macroeconomic problems arise when the Macro-Economy does not satisfactorily achieve the goals of full employment, stability, and economic growth. Unemployment results when the purpose of full work is not met. Inflation exists when the economy falls short of the stability goal. These problems are caused by too little or too much demand for gross production. Unemployment results from too small application, and inflation emerges with too much need. Stagnant growth means the economy is not adequately attaining the economic growth goal. Each of these situations is problematic because society is less well off than it would be by reaching the goals

In this project, we are going to learn about the macroeconomic challenges faced by the Indian economy

The referred websites in this project are used as a source of data for this project. Most of the content is collected from these websites. The authenticity of this information cannot be taken seriously, and thus, keeping that in mind, most of that data might be real or fake.

Problems faced by the Indian economy can be classified as follows:

Fuelled by rising wages, property prices, and food prices, inflation in India is an increasing problem. Inflation is currently between 8-10%. This inflation has been a problem despite periods of an economic slowdown. For example, in late 2013, Indian inflation reached 11%, despite growth falling to 4.8%. This suggests that inflation is not just due to excess demand, but is also related to cost-push inflationary factors. For example, supply constraints in agriculture have caused rising food prices. This causes inflation and is also a significant factor in reducing the living standards of the poor who are sensitive to food prices. The Central Bank of India has made reducing inflation a top priority and has been willing to raise interest rates. Still, cost-push inflation is more difficult to solve, and it may cause a fall in growth as they try to reduce inflation.

Although India has benefited from a high % of English speakers. (important for call center industry) There are still high levels of illiteracy amongst the population. It is worse in rural areas and amongst women. Over 50% of Indian women are illiterate. This limits economic development and a more skilled workforce.

Many Indians lack basic amenities lack access to running water. Indian public services are creaking under the strain of bureaucracy and inefficiency. Over 40% of Indian fruit rots before it reaches the market; this is one example of the supply constraints and inefficiency’s facing the Indian economy.

Although India has built up large amounts of foreign currency reserves, the high rates of economic growth have been at the cost of a persistent current account deficit. In late 2012, the current account reached a peak of 6% of GDP. Since then, there has been an improvement in the current account. But, the Indian economy has seen imports grew faster than exports. This means India needs to attract capital flows to finance the deficit. Also, the large deficit caused the depreciation in the Rupee between 2012 and 2014. Whilst the deficit remains, there is always the fear of a further devaluation of the Rupee. There is a need to rebalance the economy and improve the competitiveness of exports.

Buoyed by a property boom, the amount of lending in India has grown by 30% in the past year. However, there are concerns about the risk of such loans. If they are dependent on rising property prices, it could be problematic. Furthermore, if inflation increases further, it may force the RBI to increase interest rates. If interest rates rise substantially, it will leave those indebted facing rising interest payments and potentially reducing consumer spending in the future

It is hoped that economic growth would help drag the Indian poor above the poverty line. However, so far economic growth has been highly uneven benefiting the skilled and wealthy disproportionately. Many of India’s rural poor are yet to receive any tangible benefit from India’s economic growth. More than 78 million homes do not have electricity. 33% (268million) of the population live on less than $1 per day. Furthermore, with the spread of television in Indian villages, the poor are increasingly aware of the disparity between rich and poor. (3)

India has one of the largest budget deficits in the developing world. Excluding subsidies, it amounts to nearly 8% of GDP. Although it is fallen a little in the past year. It still allows little scope for increasing investment in public services like health and education.

As an example Firms employing more than 100 people cannot fire workers without government permission. The effect of this is to discourage firms from expanding to over 100 people. It also discourages foreign investment. Trades Unions have an important political power base and governments often shy away from tackling potentially politically sensitive labor laws. As discussed in our topic how many firms in India manufacture soaps and toothpaste

Agriculture produces 17.4% of economic output but, over 51% of the workforce is employed in agriculture. This is the most inefficient sector of the economy, and reform has proved slow.

2013/14 has seen a slowdown in the rate of economic growth to 4-5%. Real GDP per capita growth is even lower. This is a cause for concern as India needs a high growth rate to see rising living standards, lower unemployment, and encouraging investment. India has fallen behind China, which is a comparable developing economy

India has to depend on foreign countries for the supply of machinery, capital goods, and technical knowledge. She exports raw-materials and imports manufactured goods. The import of capital goods involves high costs due to higher prices. India depends too much on imports, which makes her economy dependable on others and affects the terms of trade.

A market economy is relatively new for India. A country can benefit from it by the development of human capital, increasing investments in human resources that will reduce such problems as poverty, inequity, and unemployment. In addition, the situation of the infrastructure mentioned earlier can be improved, and it is easier to create the entrepreneurial environment in the country through an established market economy. Therefore, good economic liberalization will benefit India in economic growth and development of society.

However, there are some critics of the market economy in India. Some argue that due to economic liberalization, the wealth will be concentrated in the hands of a few people out of the whole society that will increase inequality and social differences. In addition, social security will be worst since before it was managed and controlled somehow by a government. As was mentioned earlier, India now is just developing into a market economy, and it definitely takes time to see the results.

In the modern world of globalization, a market of the third world countries like India has an opportunity to grow. Therefore, it is important to understand that the government is no longer dominant in this situation as it was before. However, a state can play a crucial role in these changes; it needs to control how the market operates and that the outcomes of this economy are directed in the right way. Therefore, an established market economy does not necessarily mean the complete elimination of government that was always visible in India in economic, social, and cultural sectors. 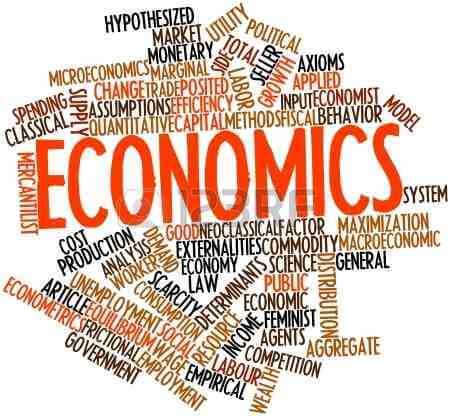 Since the reforms of 1991, India has shown much better results than during the pre-reform period. GDP, overall export, and foreign exchange reserves grew significantly. India became an attractive destination for foreign investments. Reforms played a big role in the development of certain industries in India. For instance, the information technology sector grew extensively, export and domestic sales of software increased noticeably.

Therefore, it was proved that protectionism was not the way to success. On the contrary, the introduction of multinational companies increased competition in the national market. It forced Indian enterprises to adopt world-class infrastructure, quality processes, human resources practices, and so forth (Murthy, 2004).

Apart from the positive economic results, the market economy benefited Indian society as well. It was noticed that poverty decreased, literacy levels went up, and people became more motivated to receive an education. Therefore, economic reforms in India resulted in economic growth and social development.

In spite of the problems listed above, if we compare the present economic condition of our country with the pre-independence period, we find that the long spell of stagnation in the Indian economy was broken after the Independence of India. The present position of the Indian economy, though not satisfactory, is much better than it was some 50-70 years ago. With the beginning of economic planning, an era of economic development started. Economic development in India has broadly two faces Quantitative and structural. We see spectacular progress has taken place in the line of:

As a result, investment in the economy has been stepped up. We also notice an increase in agricultural and industrial production. Steps have been taken to modernize these sectors in India.

The current economic scene in India is more or less encouraging, but we are still way behind achieving full employment, poverty eradication, education for all, and industrialization.

Indian economy is a developing economy. By taking the remedial measures to tackle the economic problems, India can surely target to become a developed economy.

After discussing the topic here are some suggestions from the people

It gives me immense pleasure to take the opportunity to all the people who are directly or indirectly involved in the completion of my project based on Prepare a List of Macro-Economics Problems of Indian Economy and Comment on Them in Brief.

Lastly, I thank Almighty, my parents, family members, friends, and teachers for their constant encouragement and support without which this project would not be possible.

Nawaf, An Twentieth-something savvy Web Designer / Social Media Manager / SEO Strategist based In India. He is Passionate about Web Designing, Programming, And Web Security. He is currently learning Management Studies and is in the Second Year
Previous An Interview With a Share Broker
Next A Report on Procedure of Winding up Partnership Firm