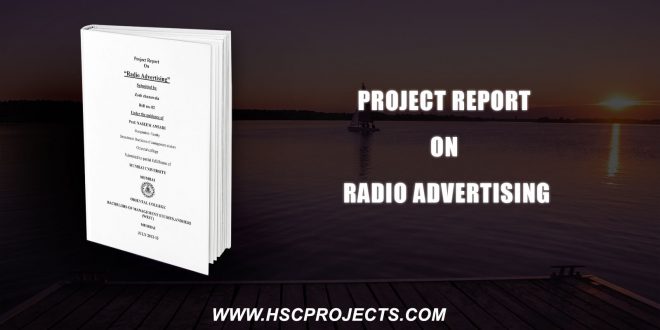 Advertising, in general, expresses the positioning. Powerful advertising is the result of powerful planning. Great ideas and great ad campaigns don‟t just pop out from nowhere they are built on the key communication points that motivate sales.

Radio is entirely a medium of sound, which evokes smells, sensations and visual images which brings the listeners imaginations into play.

Radio advertising is one of the tools of advertising which is effectively used for communication and positioning. It is one of the foundations for effective and successful advertising. Radio can be used effectively for the advertisement since it can target a large audience because of its high reach. Radio is good at increasing awareness about the brand and business and helping in building the brand image.

But all this was only for purely academic purpose. With the advent of television, radio lost its popularity and thus its purpose with the marketers. This led to sharp declines in the proportion of advertisement spending on the radio as compared to other media.

But then came the governments’ order on liberalization and privatization. This brought about loads of changes in the world of radio broadcasting in India. Prominent and established companies entered the business of FM Broadcasting.

FM broadcasting has breathed a new life into the medium of Radio in the past few months. Could radio now think this as a new phase of its life or a re-birth? Of course yes, people are today talking only Radio- Radio Mirchi, Radio City, RED, Go and WIN.

Old media don‟t‟ die! They just bounce back in new avatars. Not so long ago radio had been written off as fuddy-duddy, down market and not so cool. Television and later “new media” were touted to being the media of the future. But thanks to technology radio is making a comeback. In fact, in its new avatar-FM-radio is all set to become the hippest, coolest and most with -it medium.

FM radio is a new entity altogether and has to deal with new market dynamics. Media owners dealing with new markets will virtually have to draw up their strategies as they go along, create programming that is new, innovative and grab away eyeballs from TV sets and make them tune into their radio sets. It‟s a whole new challenge and competition is never far away. Ad revenues will also not be easy to come by, as advertisers will expect media players to put their money where their speakers are before they commit large sums of money towards radio advertising. The other challenge for radio in attracting advertisers is the nature of the medium-radio has always considered being a reminder medium. The involvement of listeners to radio is low, Vis a Vis television or print media.

However, in spite of the various challenges the emergence of private FM stations is certain to increase the quantum of radio advertising in the country, much like satellite channels did to the quantum of television advertising in the country. That should open up a vast new market of consumers-100 million Indian households own an estimated 150 million radios, outnumbering television sets 3:1.

The geographical area covered by radio in India in India is as high as 98 percent and the penetration level is approximately 97 percent. But FM presently covers only 17 percent of the area and 21 % of the population of India through transmitters. Currently, radio has just 2 percent of the 9000 crores Indian advertising market according to an Arthur Anderson‟s survey. Globally depending on each country, radio has a 5 % to 12 % of the advertising cake. On the higher side are countries like the United States with 13 %, Canada with 12.7% and Spain with 9.1%.

Nawaf, An Twentieth-something savvy Web Designer / Social Media Manager / SEO Strategist based In India. He is Passionate about Web Designing, Programming, And Web Security. He is currently learning Management Studies and is in the Second Year
Previous To Understand The Working Of Vasai Virar Mahanagar Transport
Next A Study On Customer Buying Behaviour Towards D-Mart