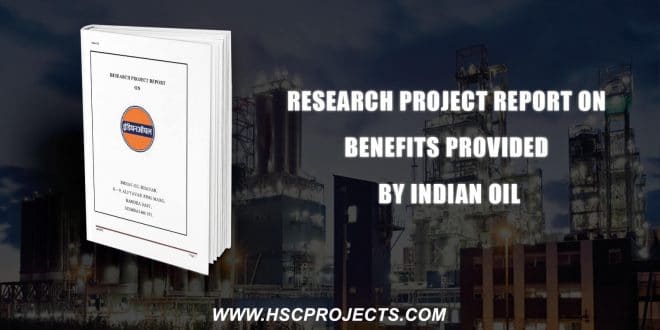 The company selected for research is Indian Oil. The origin of the oil & gas industry in India was struck at Makum near Margherita in Assam in 1867. At the time of Independence in 1947, the Oil & Gas industry was controlled by international companies. India’s domestic oil production was just 250,000 tonnes per annum and the entire production was from one state – Assam.

The foundation of the Oil & Gas Industry in India was laid by the Industrial Policy Resolution, 1954 when the government announced that petroleum would be the core sector industry. In pursuance of the Industrial Policy Resolution, 1954, Government-owned National Oil Companies ONGC (Oil & Natural Gas Commission), IOC (Indian Oil Corporation), and OIL (Oil India Ltd.) were formed. ONGC was formed as a Directorate in 1955 and became a Commission in 1956. In 1958, Indian Refineries Ltd, a government company was set up. In 1959, for marketing of petroleum products, the government set up another company called Indian Refineries Ltd. In 1964, Indian Refineries Ltd was merged with Indian Oil Company Ltd. to form Indian Oil Corporation Ltd.

During the 1960s, a number of oil and gas-bearing structures were discovered by ONGC in Gujarat and Assam. Discovery of oil in significant quantities in Bombay High in February 1974 opened up new avenues of oil exploration in offshore areas. During the 1970s and till mid-1980s exploratory efforts by ONGC and OIL India yielded discoveries of oil and gas in a number of structures in Bassein, Tapti, Krishna-Godavari-Cauvery basins, Cachar (Assam), Nagaland, and Tripura. In 1984-85, India achieved a self-sufficiency level of 70% in petroleum products. In 1984, the Gas Authority of India Ltd. (GAIL) was set up to look after transportation, processing, and marketing of natural gas and natural gas.

GAIL has been instrumental in the laying of a 1700 km-long gas pipeline (HBJ pipeline) from Hazira in Gujarat to Jagdishpur in Uttar Pradesh, passing through Rajasthan and Madhya Pradesh. After Independence India also made significant additions to its refining capacity. In the first decade after independence, three coastal refineries were established by multinational oil companies operating in India at that time. These included refineries by Burma Shell, and Esso Stanvac at Mumbai, and by Caltex at Visakhapatnam. Today, there are a total of 18 refineries in the country comprising 17 in the Public Sector, one in the private sector. The 17 Public sector refineries are located at Guwahati, Barauni, Koyali, Haldia, Mathura, Digboi, Panipat, Vishakapatnam, Chennai, Nagapattinam, Kochi, Bongaigaon, Numaligarh, Mangalore, Tatipaka, and two refineries in Mumbai. The private sector refinery built by Reliance Petroleum Ltd is in Jamnagar. It is the biggest oil refinery in Asia.

Nawaf, An Twentieth-something savvy Web Designer / Social Media Manager / SEO Strategist based In India. He is Passionate about Web Designing, Programming, And Web Security. He is currently learning Management Studies and is in the Second Year
Previous Shopping Experience Of Customer – Reference To Bangalore City
Next Study On Consumer’s Perception Towards Domino’s Pizza