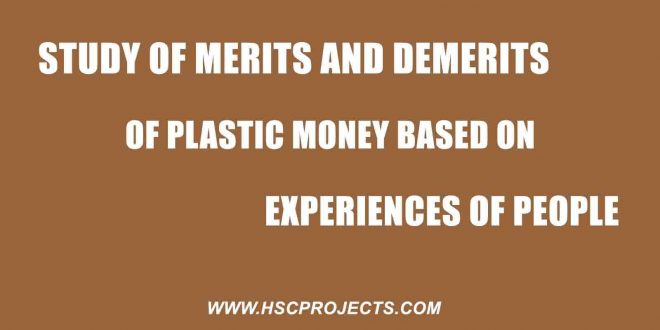 Plastic money or polymer money, made out of plastic, is a new and more natural way of paying for goods and services. Plastic money was introduced in the 1950s and is now an essential form of immediate payment, which reduces the risk of handlings a huge amount of cash. It includes Debit cards, ATMs, smart cards, etc.  Credit cards, variants of plastic money, are used as substitutes for currency.

Plastic money refers to credit cards; we use them whenever we want and pay later (with interest, of course). It makes it too easy for us to buy things we usually could not afford, which makes it easier to get into debt.

A slang phrase for credit cards, mainly when such cards used to make purchases. The “plastic” portion of this term refers to the plastic construction of credit cards, as opposed to paper and metal currency. The “money” portion is an erroneous reference to credit cards as a form of money, which they are not. Although credit cards do facilitate transactions, because they are a liability rather than an asset, they are not money and not part of the economy’s money supply.

History of Credit Cards and Debit Cards In Plastic Money

Credit cards have evolved into a safe and secure manner to purchase goods and services. The internet has given credit card users additional purchasing power. Banks have options like cash-back rewards, saving plans, and other incentives to entice people to use their cards. Debit cards allow people the convenience of cards without the worry of racking up debt. The comfort, security, and rewards offered by credit and debit cards keep shoppers using their cards as opposed to cheques or cash.

Individual stores and merchants issued the first credit cards. These cards were issued in limited locations and only accepted by the business that issued them. While the cards were convenient for the customers, they also provided customer loyalty and customer service benefit, which was suitable for both customers and merchants. It was not until 1950 that the Dinner’s Club card was created by a restaurant patron who forgot his wallet and realized there needed to be an alternative to cash only. This started the first credit card specifically for widespread use, even though it was primarily used for entertainment and travel expenses.

The first Diner’s Club cards were made out of cardboard or celluloid. In 1959 American Express changed all that with the first card made of plastic. American Express created a system of making an impression of the ticket presented at the register for payment. Then that impression was billed to the customer and due in full each month. Several American Express cards till operating like this as of 2010. It was not until the late 1980s that American Express began allowing people to pay their balance over time with additional card options.

In 1966, Bank of America created a card that was a general-purpose card or “open-loop” card. These “closed-loop” agreements limited cards like Diners Club and American Express to individual merchants, unlike the new “open-loop” cards. The new general-purpose system required interbank cooperation and additional regulations. To his created other safety features and began building the credit card system of today. Two systems emerged as the leaders–Visa and Master Card. However, today, there is little difference between the two, and most merchants accept both card associations.

The Visa association of cards took credit cards to a new level in 1989when they introduced debit cards. These cards linked consumers to their checking accounts. Money was now drawn from a checking account at the point of sale with these new cards and replaced check writing. This helped the merchants check that money was available and made it easier to track the customer if the funds could not be obtained. Consumers liked the convenience of not having to write checks at the point of sale, which made debit cards a safe alternative to cash and checks.

There were almost 29 million debit card users as of 2006, with a projected 34.4 million users by 2016. However, online services like PayPal are emerging as a way for people to pay their debts in new, secure, and convenient forms. Technology also exists to have devices implanted into phones, keys, and other everyday devices so that the ability to pay at the point of sale is even more convenient.

Objectives of the project are as follows

To study how to use plastic money worldwide

In dealing with the real-life problem, it is often found that data at hand are inadequate, and hence, it becomes necessary to collect data that is appropriate. There are several ways of managing the relevant data which differ considerably in the context of money costs, time and other resources at the disposal of the researcher

A rigid procedure was followed, and we were seeking answers to many pre-conceived questions through personal interviews.

Information to find out the investment potential and goal was found out through surveys.

A credit card is a small plastic card issued to users as a system of payment. It allows its holder to buy goods and services based on the holder’s promise to pay for these goods and services. The issuer of the card grants a line of credit to the consumer or the user) from which the user can borrow money for payment to a merchant or as a cash advance to the user. Usage of the term “credit card” to imply a credit card account is a metonym. When a purchase is made, the user would indicate consent to pay by signing a receipt with a record of the card details and indicating the amount to be paid. The issuer agrees to pay the merchant, and the credit card user agrees to pay the card issuer.

The credit card can be defined as “A small plastic card that allows its holder to buy goods and services on credit and to pay at fixed intervals through the card-issuing agency.

A credit card is a card or mechanism which enables the cardholder to purchase goods, travels, and dine in a hotel without making immediate payments. The holders can use the cards to get credit from banks up to 45days.      The credit card relieves the consumers from the botheration of carrying cash and ensures safety. It is a convenience of extended credit without formality. This credit card is a passport to “safety, accessibility, prestige, and confidence. 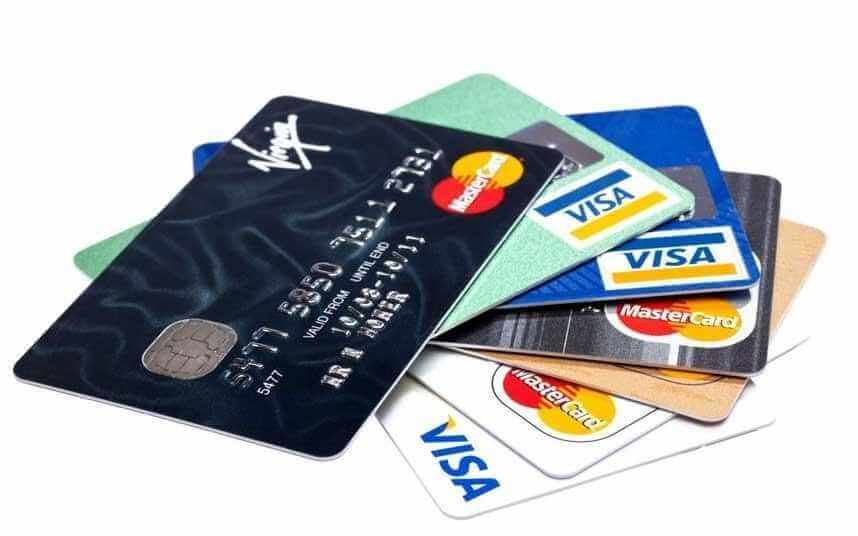 The benefits of a credit card can be grouped as follows:

Also, check out this project on Cashless Economy CBSE Board. It will provide you all the valuable data related to cashless economies like credit cards, debit cards, bank transfer, etc

The following are the common disadvantages of the credit card:

The financial institution or other organization that issued the credit card to the cardholder.

The flow of information and money between these parties — always through the card associations — is known as the interchange, and it consists of a few steps: 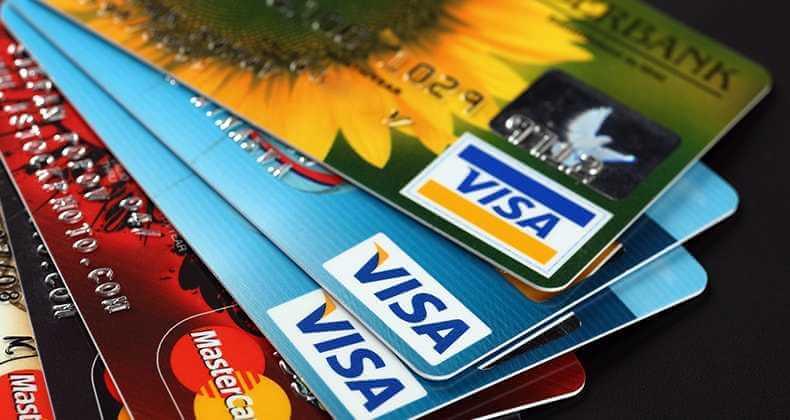 Following are the findings that are drawn from the study:

The growth credit card in India is still very slow. Companies are going hard to increase the sale of credit cards.

In the last two years, spending pattern through plastic money has changed drastically. Travelling, dining, and jewelry are the top three purchases that Indian makes through credit cards. Two years ago, it was jewelry and apparel purchases that formed the most significant chunk of investments through plastic money. Fuel accounts for a tiny portion of credit card purchases, as these are primarily paid through debit cards.

Consumers were not only more open to the possibility of owning a business card but were also more than willing to use their cards to settle dues. The status symbol aspect of owning and using cards, too, played its part in bringing about such robust growth over the space of a single year. Debit cards, in particular, proved immensely popular.

According to projections for the 2003-2008 period, the number of financial cards in circulation will register a compounded annual growth rate of nearly 51 percent sp the satisfaction of consumers has also increased. There are many ethical issues and challenges for plastic money issuing banks/ companies. Security relating to the card should be the priority for each bank/company.

Consumers prefer these cards mostly for shopping online E-commerce has given a better way to use plastic money.

At last, it is concluded that plastic money has a very bright future in the coming years because of the increasing trend of E-commerce.

Some people prefer the simplicity of debit cards: you buy something, and your money goes away. My friend elaborates

“I have a debit card (with no fees or anything) and hope I never have to get a credit card. With a debit card, I pay exactly what the item is worth and no more since there is no interest. I don’t have to jump through any hoops for “miles” or “points” or any other nonsense. What it boils down to is that debit card is the simple choice for people that want to spend the money they have without actually carrying any around or any of the conditions associated with a credit card.”

Nawaf, An Twentieth-something savvy Web Designer / Social Media Manager / SEO Strategist based In India. He is Passionate about Web Designing, Programming, And Web Security. He is currently learning Management Studies and is in the Second Year
Previous Functional Report of SEBI – HSC Project Maharashtra Board
Next Bad Effects of Various Festivals on Environment – HSC Project Maharashtra Board