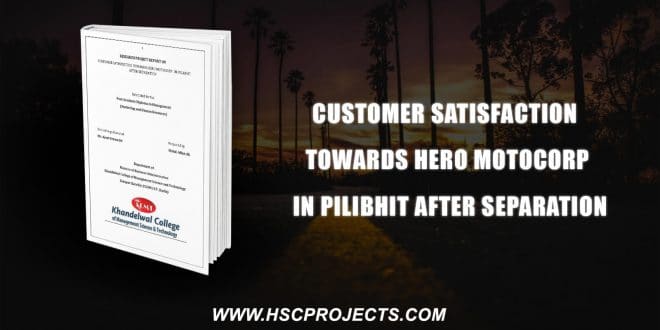 Customer Satisfaction Towards Hero Motocorp In Pilibhit After Separation

Customer Satisfaction Towards Hero Motocorp In Pilibhit After Separation

Hero Motocorp Ltd., formerly Hero Honda, is an Indian motorcycle and scooter manufacturer based in New Delhi, India. The company is the largest two-wheeler manufacturer in the world. In India, it has a market share of about 46% share in the 2-wheeler category. The 2006 Forbes 200 Most Respected companies list has Hero Honda Motors ranked at #108. On 31 March 2013, the market capitalization of the company was INR 308 billion (USD 5.66 billion).

Hero Honda started in 1984 as a joint venture between Hero Cycles of India and Honda of Japan. In 2010, when Honda decided to move out of the joint venture, Hero Group bought the shares held by Honda. Subsequently, in August 2011 the company was renamed Hero MotoCorp with a new corporate identity.

In June 2012, Hero Motocorp approved a proposal to merge the investment arm of its parent Hero Investment Pvt. Ltd. into the automaker. The decision comes after 18 months of its split from Honda Motors.

“Hero” is the brand name used by the Munjal brothers for their flagship company, Hero Cycles Ltd. A joint venture between the Hero Group and Honda Motor Company was established in 1984 as the Hero Honda Motors Limited at Dharuhera, India. Munjal family and Honda group both owned 26% stake in the Company.

During the 1980s, the company introduced motorcycles that were popular in India for its fuel economy and low cost. A popular advertising campaign based on the slogan ‘Fill it – Shut it – Forget it’ that emphasized the motorcycle’s fuel efficiency helped the company grow at a double-digit pace since inception. In 2001, the company became the largest two-wheeler manufacturing company in India and globally. It maintains global industry leaders to date. The technology in the bikes of Hero Motocorp (earlier Hero Honda) for almost 26 years (1984–2010) has come from the Japanese counterpart Honda

Title – Customer Satisfaction Towards Hero Motocorp In Pilibhit After Separation

Nawaf, An Twentieth-something savvy Web Designer / Social Media Manager / SEO Strategist based In India. He is Passionate about Web Designing, Programming, And Web Security. He is currently learning Management Studies and is in the Second Year
Previous Evaluation Of Recruitment And Selection Process In Airtel
Next A Study On Employee Satisfaction In Avatar Gold And Diamonds, Edappal