Home / MBA Projects / A Project Report On Study Of Microfinance 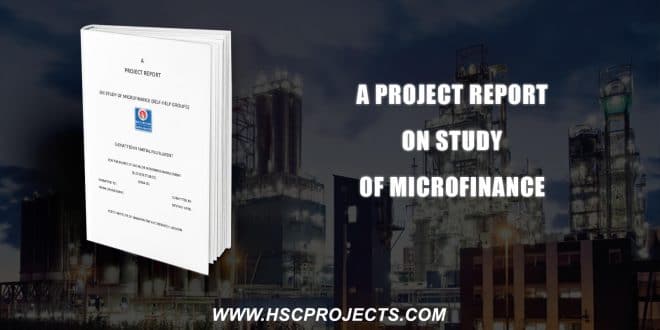 A Project Report On Study Of Microfinance

A Project Report On Study Of Microfinance

There is a mounting hope that microfinance can be large scale poverty alleviation tool for decades India’s poor have been left out of the reach of the bank loans. But out of necessity and enterprise, those locked out of the banking world have found a way out. It is called microcredit-the extension small loans to individuals who are too poor to qualify for a traditional bank, loans, as they have no assets to be offered as a guarantee. In India, microcredit has largely worked only through self-help groups. Globally it is slowly proving one of the most effective strategies to remove poverty. Banks too are shedding their old reluctance to lend to the poor, and are looking to tap the expertise of microcredit groups to create a new market which has been emphatically projected on the current study

Self-Help Group or in-short SHG is now a well-known concept. It is now almost two decades old. It is reported that the SHGs have a role in hastening country’s economic development. SHGs have now evolved as a movement. Mainly, members of the SHGs are women. Consequently, the participation of women in the country’s economic development is increasing. They also play an important role in elevating the economic status of their families. This has led a boost to the process of women’s empowerment.

I undertook this project report mainly for the purpose of understanding the importance of SHG’s in today’s banking and Indian economy.

All in all, microfinance is all about how bank and government institutions help the backward class and encourage their savings, and provide their banking knowledge

Title – A Project Report On Study Of Microfinance

Nawaf, An Twentieth-something savvy Web Designer / Social Media Manager / SEO Strategist based In India. He is Passionate about Web Designing, Programming, And Web Security. He is currently learning Management Studies and is in the Second Year
Previous Study On Consumer’s Perception Towards Domino’s Pizza
Next A Project Report On Taxation