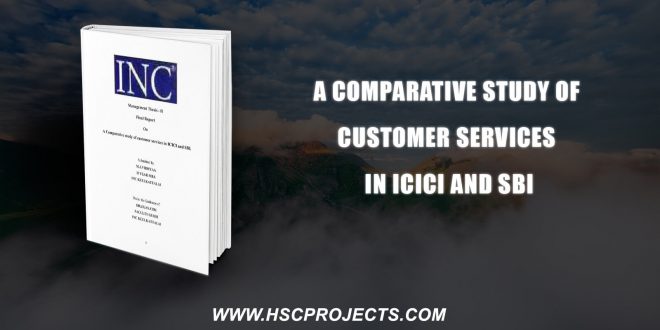 A Comparative Study Of Customer Services In ICICI And SBI

A Comparative Study Of Customer Services In ICICI And SBI

Currently, India has 88 scheduled commercial banks (SCBs) – 27 public sector banks (that is with the Government of India holding a stake), 29 private banks (these do not have government stake; they may be publicly listed and traded on stock exchanges) and 31 foreign banks. They have a combined network of over 53,000 branches and 17,000 ATMs. According to a report by ICRA Limited, a rating agency, the public sector banks hold over 75 percent of total assets of the banking industry, with the private and foreign banks holding 18.2% and 6.5% respectively.

Indian merchants in Calcutta established the Union Bank in 1839, but it failed in 1848 as a consequence of the economic crisis of 1848-49. The Allahabad Bank, established in 1865 and still functioning today, is the oldest Joint Stock bank in India. When the American Civil War stopped the supply of cotton to Lancashire from the Confederate States, promoters opened banks to finance trading in Indian cotton. With large exposure to speculative ventures, most of the banks opened in India during that period failed. The depositors lost money and lost interest in keeping deposits with banks. Subsequently, banking in India remained the exclusive domain of Europeans for the next several decades until the beginning of the 20th century.

Title – A Comparative Study Of Customer Services In ICICI And SBI

Nawaf, An Twentieth-something savvy Web Designer / Social Media Manager / SEO Strategist based In India. He is Passionate about Web Designing, Programming, And Web Security. He is currently learning Management Studies and is in the Second Year
Previous A Study On Customer Satisfaction In Big Bazaar
Next Business Studies Project Class 11 – Visit to a mall