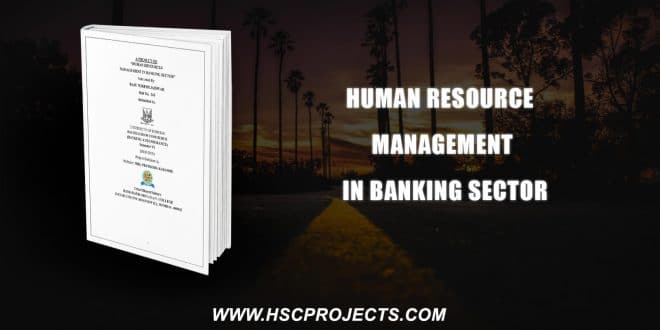 This article enlightened the banking activity which thrives on the strength of people power”. People are the direct factors of productivity of its services and people are its sole consumers”. Banking was a thriving industry in ancient India. Initially, the industrial houses pioneered banks with a view to generating funds for productive activities and at the same time offered considerable security, liquidity and fair returns to the depositors. In a way, banking continued to be a traditional industry until 1969. When major banks were taken over by the Government of India. With nationalization, banks ceased to be funding agencies only for the industrial sector and became a vivacious instrument of social change more statistical data are available in support of the proposition that there is a phenomenal growth of banking industry.

In any organization, managing personnel in the process of making sure the employees (not the customers) are as productive as they can be. This can include hiring, firing, or transferring people to/from jobs they can do most productively.

This subject is a major at many universities or a minor in the business school. It is also known as personnel administration, which is functionally an equivalent term.

Nawaf, An Twentieth-something savvy Web Designer / Social Media Manager / SEO Strategist based In India. He is Passionate about Web Designing, Programming, And Web Security. He is currently learning Management Studies and is in the Second Year
Previous A Study On Customer Satisfaction Towards The Products And Services Of Axis Bank Chennai
Next Customer Satisfaction With References to Idea Services