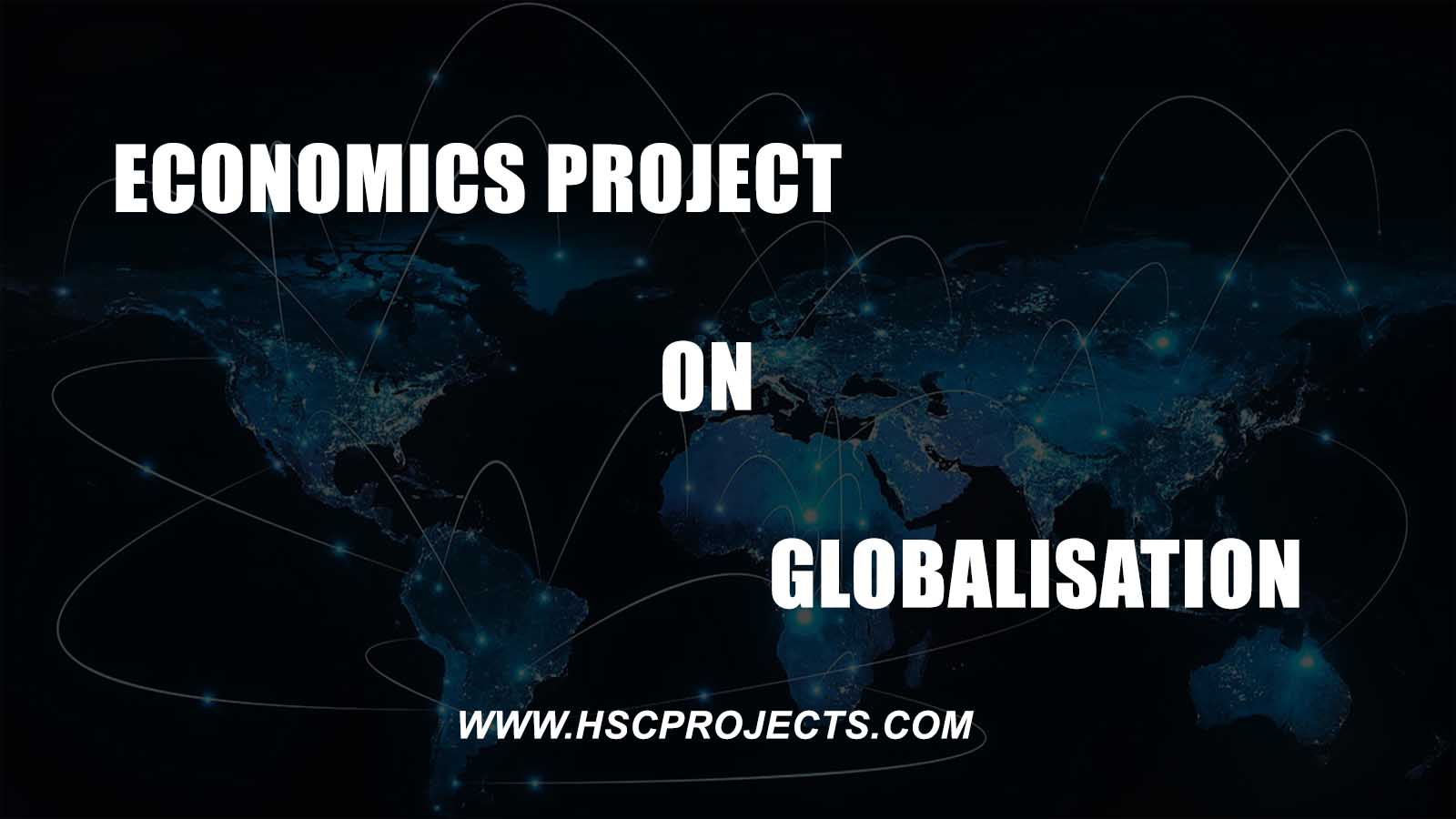 The term globalization is derived from the word globalize, which refers to the emergence of an international network of the economic systems. Since its inception, the concept of globalization has inspired competing for definition and interpretations, with antecedents dating back to the great movements of trade and empire across Asia and the Indian ocean from the 15th century onwards. Due to the complexity of the concept, research projects, articles, and discussions often remain focused on a single aspect of globalization. Globalization can be located on a continuum with the local, national, and regional. At one end of the continuum lie social and economic relations and networks which are organized on a local on a national basis at the other end lie social and economic relations which crystallize the wider scale of global interactions.

There are both distal and proximate causes, which can be traced to the historical factors affecting globalization. Large-scale globalization began in the 19th century. Globalization is not a new phenomenon. For centuries individuals have been buying and selling goods to individuals in other lands. Through the years, globalization has continued to spread through the passing of information and communication. International commodity markets, labor markets, and capital markets make up the economy and define economic globalization. Beginning as early as 4000 BCE, people were trading livestock, tools, and other items. In early civilization, in Mesopotamia, a token system was the first form of commodity money.

Globalization refers to the integration of markets in the global economy, leading to the increased interconnectedness of national economies, or it is the process of rapid integration or interconnection between countries. Markets, where globalization is particularly common, to include financial markets, such as capital market, money and credit market and insurance market, commodity markets, including markets for oil, coffee, tin and gold, and product market, etc. MNC’s that are Multi-National Countries are playing a major role in the process of globalization. More and more goods and services, investments, and technology are moving between countries. This is the integration of economies, industries, markets, culture, and policymaking around the world. Globalization describes a process by which national and regional economies, societies, and cultures have been integrated through the global network of trade, communication, immigration, and transportation. In the more recent past, globalization was often primarily focused on the economic side of the world, such as trade, foreign direct investment, and international capital flow, more recently the team has been expanded to include a broader range of areas and activities such as culture, media, technology, socio-cultural, political and even biological factors, e.g., climate change. Globalization is defined as a system related to increasing interaction, growing economic independence, and widening economic integration is the world economy. It encourages the integration of the economy of the country with the world economy. It is an outcome of a set of various policies that are aimed at transforming the world towards greater interdependence and integration. It involves the creation of networks and activities transcending economic, social, and geographical boundaries. It encourages foreign trade, private and institutional foreign investment. It practically removes all hindrance and restriction of foreign trade.

Globalization is a process of deeper integration between countries and regions of the world involving:

Shares of World Economic Output in 2015 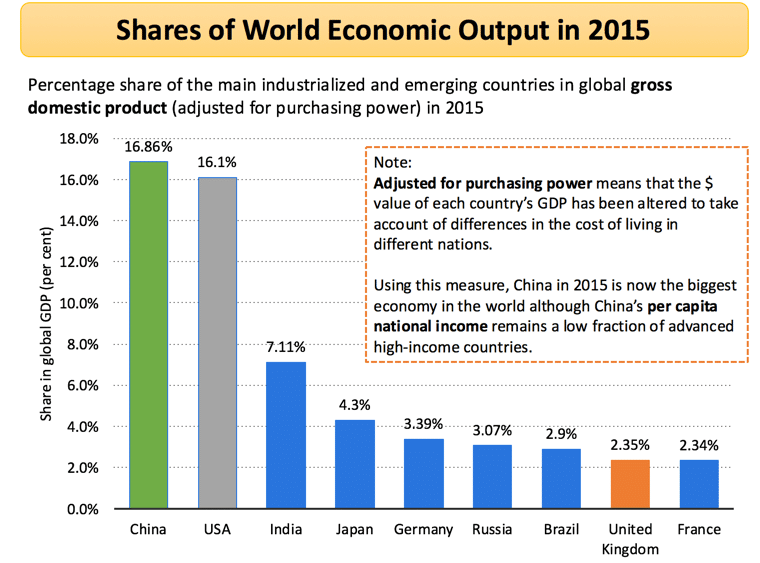 Using this measure, China in 2015 is now the biggest economy in the world, although China’s per capita national income remains a low fraction of advanced high-income countries.

Our new economic policy contributed to globalization in the following ways:

There are also several disadvantages of globalization as the coin had two sides with it:

IMPACT OF GLOBALISATION IN INDIAN ECONOMY:

The advent of foreign companies and growth in the economy has led to job creation. However, these jobs are concentrated more on the services sector, and this has led to the rapid growth of the service sector creating problems for individuals with low levels of education. The last decade came to be known for its jobless growth as job creation was not satisfied with the level of economic growth.

Globalization has led to a boom in the consumer product market. We have a range of choices in selecting goods, unlike the times where there were just a couple of manufacturers.

People in cities working in high paying jobs have a higher income to spend on lifestyle goods. There has been an increase in the demand for products like meals, eggs, pulses, organic food as a result. It has also led to protein inflation.

IMPACT OF GLOBALISATION ON INDUSTRIAL SECTOR:

This is one of the most important outcomes of the globalisation process. In outsourcing, a company hires a regular service from external sources, mostly from other countries, which was previously provided internally or from within the country like [legal advice, computer service, advertisement, securities each provided by the respective department of the country) a form of economic activity. Outsourcing has been intensified in the recent times because of fast modes of communication, particularly the growth of information technology with the help of modern telecommunication links including internet, the text, voice, and visual data in respect of these are digitized and transmitted in real-time over the continents and national companies. Most Multi-National Corporations and even small companies are outsourcing their services to India, where they can be availed at a cheaper cost with a reasonable degree of shell and accuracy.

After Independence in 1947, the Indian government faced a major problem in developing the economy and to solve issues. Considering the issues pertaining at that time, the government decided to follow LPG Model [Liberalization, Privatization, and Globalisation model]. The economic growth conditions of India at that time were not very good. This was because it did not have proper resources for the development, not in terms of natural resources but terms of financial and industrial development. At that time, India needed the path of economics, and for that use, the Five Years Plan concept of which was taken from Russia and feet that it will provide a fast development like that of Russia, under the view of the socialistic pattern society. India had practiced several restrictions ever since the introduction of the first industrial policy resolution in 1948.

Nawaf, An Twentieth-something savvy Web Designer / Social Media Manager / SEO Strategist based In India. He is Passionate about Web Designing, Programming, And Web Security. He is currently learning Management Studies and is in the Second Year
Previous Demographic Structure of Our Neighbour Hood Economics Project
Next Economics Project on Demand CBSE Class 12